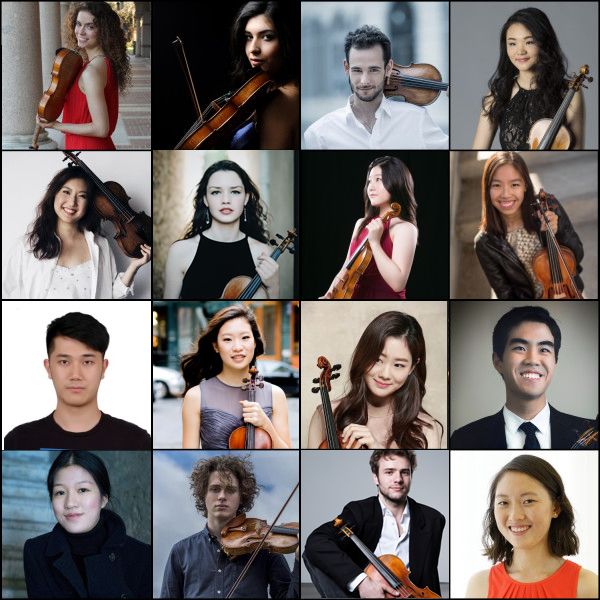 The impressive list of competitors in New Zealand’s most prestigious international music competition, the Michael Hill International Violin Competition, has been announced for 2019.

Jacqueline Audas (USA), whose previous acknowledgements include First Prize in both the 2018 North International Music Competition and the Mika Hasler Young Artist Competition 2015.

Mairéad Hickey (Ireland) who received Third Prize and Prize for the Best Interpretation of a Virtuoso Work in the Louis Spohr International Violin Competition and First Prize in the Jeunesses Musicales Violin Competition.

Shannon Lee (USA) who received Sixth Prize in the International Violin Competition of Indianapolis 2018 and First Prize in the Artist Series Concerts of Sarasota National Competition in 2018.

Harry Ward (Australia) who was a finalist in the ABC Young Performers Awards 2013, and won First Prize in the National Youth Concerto Competition in 2012.

Competition Executive Director, Anne Rodda, says, “The selection panel were hugely impressed by the high standard of entries this year. There is a growing number of international competitions for young violinists, yet the pool doesn’t seem to be getting diluted in any way. We are delighted so many of the world’s best young violinists can make it to New Zealand next year. And, because of New Zealand’s excellent reputation among international musicians, so are the competitors!”

The biennial Michael Hill International Violin Competition is one of the most sought-after violin prizes in the world. The careers of some of today’s classical music legends have been launched right here in New Zealand. 2019 is the tenth competition.

Rounds One and Two (Quarter-Finals) featuring solo and piano-accompanied works take place in Queenstown from 31 May to 3 June 2019. From there, six Semi-Finalists will be selected to head up to Auckland for Round Three, which takes place on 5 and 6 June at the Town Hall. Leading New Zealand musicians, drawn from the country’s top ensembles, will perform Mozart Quintets with the competitors.

The Auckland Philharmonia Orchestra will accompany the three Finalists at the Grand Finale on Saturday 8 June, with Music Director Giordano Bellincampi conducting.

As well as establishing the careers of some of today’s most renowned violinists, the “Michael Hill” is acknowledged for its superstar judging panel. Every year, Queenstown and Auckland play host to some of the world’s greatest violin soloists and teachers (please see notes below).

The winner of the Michael Hill receives NZ$40,000, a recording contract with the Atoll label, an intensive performance tour across New Zealand and Australia, a personalised professional development programme, a Spirit Bay pendant designed by Lady, Christine Hill and a tour outfit by either Kiri Nathan or Working Style.

The winner is also invited to perform on Sir Michael Hill’s magnificent personal violin, a 1755 Guadagnini named “The Southern Star”, on their Winner’s Tour.

All live rounds are open to the public. Tickets are available now as part of the Auckland Philharmonia Orchestra subscription season. Single tickets will be on sale in February.

The entire event is also live-streamed, with audio provided by Radio NZ Concert, on www.violincompetition.co.nz, YouTube and the world’s leading online classical music news source, The Violin Channel. In 2017 online activity exceeded one million views throughout the 10-day period, of which over 70 per cent were unique.

The Project on TV3

Story on The Strad