It’s the moment we’ve all been waiting for. We’ve had a marathon of emotion, beginning in Queenstown, with sixteen extraordinary young musicians sharing their passion and pathos, charm and confidence, vigour and vivacity. 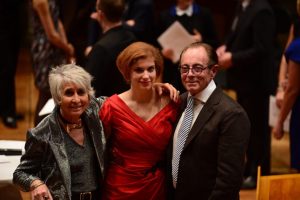 She is also invited to perform on Sir Michael Hill’s magnificent personal violin, a 1755 Guadagnini named “The Southern Star”, on her Winner’s Tour, and will receive a gown by Kiri Nathan to perform in.

Of the 2017 Competition, Sir Michael Hill says, “Nineteen years ago the idea for this Competition was born and it has never faltered in standard or its ability to put violinists on the international stage.

“Tonight’s winner was a competitor four years ago and at the time said wouldn’t return until she was capable of winning. She’s worked very hard and her playing has matured – she proved what commitment, perseverance and tenacity can do.”

Olga Šroubková won the Prize for the Best Performance of the NZ Commissioned Work, awarded in Queenstown at the end of Round II.

Also awarded tonight was the Michael Hill Audience Award, which went to Sumina Studer from Switzerland.
It’s been a wonderful journey – we’re so glad you could join us, together with these wonderful young musicians.

It’s time to say goodbye, but not for long – you’ll be able to recapture the magic when Goicea returns for her winner’s tour in 2018.